The Manchineel - World’s Most Dangerous Tree 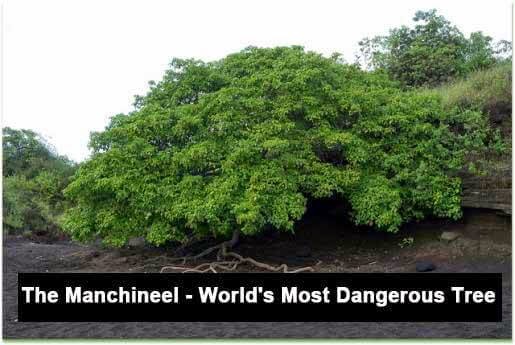 Manchineel is native to Florida in the United States, and the Caribbean coast. It holds the Guinness record for the world's most dangerous tree. It is extremely toxic; every part of it is poisonous. Its leaves, branches and bark secrete a highly toxic white creamy sap that causes burning, skin irritation. You don't actually have to touch it to be harmed. Even a single drop of rain, which has touched the Manchineel, can cause severe burns and blisters on the skin and even blindness can occur if it touches a person´s eye.

Undoubtedly the most dangerous are fruits; fleshy, appetizing, pleasant smell and similar in appearance to an apple, are lethal in small amounts. The first symptoms do not appear until a few minutes, so the unsuspecting victim still eating. Ingestion may produce severe gastroenteritis with bleeding, shock, bacterial superinfection, and the potential for airway compromise due to edema.


- Capsula Mundi: These Burial Pods Will Turn Your Loved Ones Into Trees 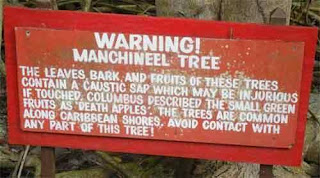 Removing the tree from populated areas proves problematic. Cutting the tree releases the sap, and if one of these deadly trees is burned, the resulting smoke can cause blindness if it reaches a person´s eye. Carib people have used its lethal properties to fight off enemies. A common torture among Caribbean tribes involved tying someone to one of these trees to suffer a slow and painful death.